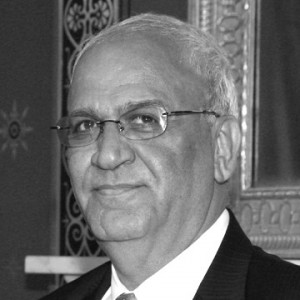 Saeb Erekat is the Secretary General of the PLO as well as Head of the Steering and Monitoring Committee of the Negotiations Affairs Department. In 1991, he was the Vice-Chair of the Madrid Peace Delegation and was later the Vice-Chair at the Washington negotiations of 1992. In 1994, he was appointed the Chairman of the Palestinian delegation for negotiations on elections and has since been a senior member of the Palestinian negotiation team. He has been extensively involved in all negotiations with Israel, including those conducted at Camp David (2000) and in Taba (2001). He is a professor of Political Science at An-Najah University in Nablus. Dr. Erekat holds a Ph.D. in Peace Studies (Bradford University), and a B.A. and M.A. in International Relations (University of San Francisco).