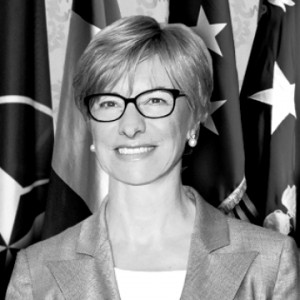 Roberta Pinotti is the Italian Minister of Defence. She started her political career in the 1990s. From 1993 to 1997 she was provincial councilor for Education, Youth and Social Policies of the Province of Genoa, her home town, while from 1997 to 1999 she was Councilor for Educational Institutes of the Genoa City Council. She continued her militancy in the Democrats of the Left and became Councilor of the Province of Genoa until 2011. She became a member of the Chamber of Deputies in May 2001. In 2006, she was appointed President of the Defence Commission of the Chamber of Deputies. Within the Democratic Party, she was National Chief for Security, then shadow Minister of Defence and chief of the party’s Defence Division. She was elected Senator in 2008 and Vice-Chairperson of the Senate Defence Commission in 2010. She was awarded the Legion of Honor at the Embassy of France in Italy. Since February 2014, she has been the Italian Minister of Defence.