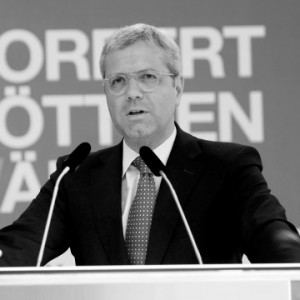 Norber Röttgen is currently Chairman of the Bundestag’s Committee on Foreign Affairs. He was first elected to the Bundestag with the Christian Democratic Union of Germany (CDU) in 1994. From 2002 to 2005 he served as Chief parliamentary secretary of the CDU/CSU parliamentary group in the Bundestag. During the first Grand Coalition Cabinet of Angela Merkel between 2005 and 2009 he was Chief Parliamentary Secretary. In 2009 he became Federal Minister for the Environment, Nature Conservation and Nuclear Safety. After 2010 he was Deputy Chairman of the CDU in Germany. In 2012 he became Substitute Member of the Foreign Affairs Committee.