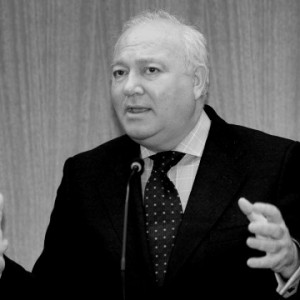 Miguel Ángel Moratinos is a Spanish diplomat and politician. He has held the post of General Deputy Director for Northern Africa and then Director of the Institute of Cooperation with the Arab World and was then appointed by the European Union as Special Representative for the Middle East Peace Process. After years of intense diplomatic activity, he engaged in politics and was elected Member of Parliament on the lists of the Spanish Socialist Workers’ Party (PSOE) in 2004. He was appointed Minister of Foreign Affairs and Cooperation. In his term at the head of the department, he held the presidency of the United Nations Security Council and the chairmanships-in-office of the Organisation for Security and Cooperation in Europe (OSCE), the Council of Europe and the Council of the European Union. He is a regular lecturer in several international institutions and forums, as well as a prolific writer of articles in Spain and abroad.