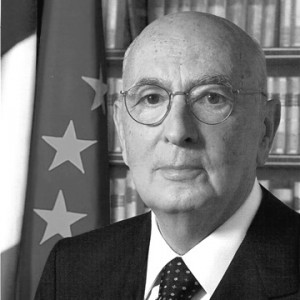 Giorgio Napolitano was born in Naples in 1925. He was elected to the Chamber of Deputies for the first time in 1953 and was a Member of Parliament until 1996, always re-elected in the Naples constituency. In the 8th (from 1981) and 9th Parliaments (until 1986) he chaired the Communist group in the Chamber of Deputies. During the 1980s his activity focused mainly on international and European policy issues, both as a member of the Foreign Affairs Committee of the Chamber of Deputies (from 1984 to 1992 and from 1994 to 1996) and of the Italian delegation to the North Atlantic Assembly. From 1989 to 1992, he was a Member of the European Parliament. In 1992 he served as Speaker of the Chamber of Deputies, and remained in office until April 1994. In 1996, he became Minister of Interior and was appointed Senator for life in 2005. On May 2006, he was elected President of the Italian Republic. Following his re-election in 2013, he served for two additional years. He is currently President Emeritus of ISPI.